In commemorating the 75th anniversary of the end of the Second World War there have been several events in The Netherlands over the course of 2019 and 2020 where we don’t only commemorate the past, but also celebrate our freedom today. Several events and activities have been organised in the UK as well and we are proud to be offering the opportunity to reflect on this grand anniversary at the Dutch Centre.

On Wednesday 4 November we are putting on an evening with journalist and author Robert Fox. He will talk to us about the difference between commemoration and memorialisation. Where do we stand currently and why do we organise elaborate parades and celebrations of events of which we have no direct memory? The lecture will be followed by a Q&A.

Please note that there will be a maximum of 30 tickets available for this event due to Covid measures we have put in place to ensure the safety of our guests and staff.  To read more about Robert Fox, please see below.Event Details:Date: 4 November 2020
Language: English
Location: Dutch CentreTime: 7pm – 8pmDoors open: 6.30pm

We would like to reassure you that we are a COVID-19 Secure Venue. The safety of our guests and staff are our utmost priority. As such, we have implemented the necessary measures that comply with all COVID-19 safety guidelines set out by the government. Please note that there will be a maximum of 30 tickets available for this event due to the measures.

Robert Fox has been a professional reporter, commentator, author and broadcaster for over 50 years. He has reported from the front in the Falklands conflict of 1982, the Middle East, including Iraq and the Palestinian territories, Bosnia, Kosovo and Afghanistan.

After leaving Oxford with an honours degree in history in 1967, he has worked as a staff reporter and correspondent for the BBC and Daily Telegraph of London. He was guest columnist for Corriere della Sera of Milan 1976-77. He is currently defence correspondent for the Evening Standard, and contributor to the Independent on Sunday, the Tablet, the New Statesman and Il Sole 24 Ore of Milan. He broadcasts frequently for the BBC, Sky, and Radio 24 in Italy.

He has specialised in military and defence matters, security and foreign policy, terrorism and organised crime for nearly 20 years.  Robert worked as a Commissioner for the Commonwealth War Graves Commission from 2012 – 2018.

Among his books are Eyewitness Falklands, a personal account of the Falklands Campaign 1982, Antarctica and the South Atlantic 1985, The Inner Sea – the Mediterranean and Its People 1990 and 1993, and Camera in Conflict, an anthology of war photography 1995. He is currently working on a study of reporting and history ‘War and Truth,’ and four part anthology of eyewitness reportage ‘Eyewitness to History.’

He has won several honours and awards including citation for Sony radio reporter for 1983, citation Overseas Press Club of America 1983, the Colombini Cinelli Prize for reporting of Italy 1992 and 1993. He was awarded an MBE for work in the Falklands Campaign. He was a Churchill Travelling Fellow 1982/3 looking at local radio, politics and crime in southern Italy and eastern Canada. 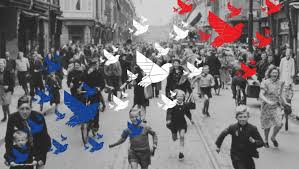