Every year we team up with Shortcutz Amsterdam for their Audience Award, a competition to chose the best Dutch short film out of 8 nominees. These films tour around the world in order to find out what an international audience believes is the Best Dutch Short Film of the Year.

Shortcutz Amsterdam is one of the Netherlands favourite platforms for emerging Dutch film talent to showcase their work, engage with an audience nationally and internationally, and to connect with the established professionals in the industry.

Watch the films for FREE you will need to register on the Shortcutz website. You will then receive and email confirmation after which you will get access to the films.

Find out more about the nominated films below.

When Inay (9) and her little brother have to join their father on a special trip through the city, she tries everything to cause a delay.

After graduating in 2016 from the Dutch Film Academy, she received the prestigious “Student Academy Award” for her short film When Grey is a Color as well as two prizes at the Toronto International Film Festival.
Her next short film EN ROUTE, which was decorated with the esteemed “Gouden Kalf” award at the Netherlands Film Festival in 2019, led directly to its international premiere at this year’s Berlinale.
Marit has seamlessly transitioned the themes and artistic style of her short films into commercial work. She recently completed thought-provoking and eye-opening campaigns for Pink Ribbon and Dreamland, highlighting subjects such as breast cancer and gender identity. In 2019 Marit was nominated for the Young Director Award during Cannes Lions Festival for her film “Finally”.

Between 1940 and 1945, Scheveningen was home to one of the most notorious prisons of the Nazis. The ironic nickname ‘Oranjehotel’ was a tribute to the many resistance fighters who were imprisoned there. An aged man looks back at his imprisonment at Oranjehotel during WWII. He tells about his experiences in the prison and in particular about his new cellmate Pieter.

Studio Motoko is run by directors Jeroen Schellekens and Mark Visser. They met at the art academy HKU in Utrecht, direction Image and Media Technology. After graduating Jeroen and Mark gained separate experience in various media fields before starting their own animation studio.
Motoko is settled in The Hague and has been creating various animations since 2008 for creative agencies, tv-channels, production companies, corporate clients and cultural organisations. The company takes the challenge to translate complex subjects into understandable, visually appealing stories.

A young actress’ (Lisa Smit) audition for an older man (Derek de Lint) grows increasingly less comfortable with every line read in this single-take horror for the #metoo era.

Yfke considers herself to be a master binger, a fantastical storyteller, a hamburger expert, and a blood-spattered fairytale princess. A Dutch native, she holds a BA and MA in Film History and Theory (2003) from the University of Amsterdam and an MFA in Film Directing (2006) from the California Institute of the Arts (CalArts). She has directed award-winning films like the zombie musical ZOMBIE LOVE, the horror documentary XANGADIX LIVES!, the rom-com ALL THE SINGLE LADIES!, and the #metoo horror LILI. Her films have screened at over a hundred festivals all over the world and have won over forty international awards.

Vera wakes up in a small boat, stranded in an unknown world. As she steps out of the boat, a child’s cry for help starts echoing, non-stop, awaking a horrible monster inside Vera. She runs for her life, but in the end, there’s no escape but to fight this monster.

Edson da Conceicao (Rotterdam, 1987) graduated from the Dutch Film Academy in 2019 with no less than 2 short films. MANIA reached the semi-finals at the Buenos Aires International Film Festival, won 7 awards including ‘Best Student Film’ at the European Cinematography Awards and won the awards ‘Best Student Foreign’ and ‘Best Visual Effects’ at the Upstate New York Horror Film festival. For directing PORFOTTO, he won multiple awards such as the Topkapi award for ‘Best Fiction Film’ and the ‘Best Student Live Action’ award at the Silk Road International Film Festival. PORFOTTO was nominated for the Tuschinski Award at the Netherlands Film Festival, landing the film in the top 3 ‘Best Graduation Films’ in the Netherlands, and was also a finalist at the 47th Student Academy Awards in 2020. Edson directed the short film LAST RIT for the 20th edition of KORT! In 2020. He is currently working as a co-director on the film THE DEATHSHOW (DE STERFSHOW) for Videoland Academy.

NO DOG IN AMSTERDAM

A lonely husky walks the empty streets of Amsterdam during the lockdown.

Lucas graduated in 2011 from the Netherlands Film Academy in Amsterdam. Since then he made several award-winning Dutch short films like “Green”, “Glimp” and “Deadwood”. Then he went on to direct 50 episodes of the popular Dutch youth series “Spangas”. During the lockdown for the coronavirus in 2020, the shoot for Wall #4 was delayed and Lucas had the chance to make another short film “No Dog in Amsterdam”, which went viral on the internet. By making films which transcend from reality, Lucas wants to distinguish himself and reflect on our society in new ways.

‘What happened? Where am I?’ The man who wakes up alone in the woods has many questions. Is he dead and in the hereafter? The voice of God soberly answers his questions: Yep, that’s right. Traffic accident. But it’s not that bad, because everyone eventually dies. All the man’s questions, also about the meaning of life, are answered.

Ben Brand graduated as a director from the Dutch Film Academy in Amsterdam. His very first commercial for the Young Director Award’ festival in Cannes won several awards, got nominated twice for the Cannes Lions and gained over 50.000.000 views worldwide. In the time that followed Ben directed multiple commercials at Caviar Amsterdam as well as two shorts; ‘Life is Beautiful’ (3D animation) and 97%’ (Live action). These films screened at over 150 international film festivals, gaining more than 2.500.000 views online and winning numerous awards. 97% also represented the Netherlands in the live-action short film category at the Oscars. In 2017, Ben’s “Find this dumb little bitch and throw her into a river” received multiple awards during its worldwide festival tour. Last year Ben directed multiple commercials all over the world and finished two new shorts. Sea You, a short animation film for Pathé Cinema and Re-Entry, a live-action film based on a short story by Andy Weir, author of the bestseller ‘The Martian’. Currently Ben is in development of both a new feature film and a television series.

In a heavily polluted world, a young woman mourns the disappearance of animal species. When she falls ill due to a bacterial infection, nature appears to send her a message in her hallucinations.

Arjan Brentjes started his career as a painter, and in 2008 he switched to moving images. Since 2010 he is dedicated to making short films, the last years mostly animation. Arjan often takes the viewer back to a visual style from the past, to look at our present, or future from there. Thereby wittily commenting on the development of our technological society and the haughtiness of man.

Short Calf Muscle is an absurdist black comedy about Anders. And Anders is different. But he doesn’t know that. Yes, he’s also gay, but that’s not the point here. There is also this thing that others see but he doesn’t.

Victoria Warmerdam graduated in 2015 as director and screenwriter with her graduation film Happily I am happy that was screened at several film festivals around the world. Right after graduation, she won the first Burny Bos Talent Award for her sci-fi feature film project Spacekees. In 2017 she wrote the romantic fairytale short Soap and in 2019 her black comedy Short Calf Muscle premiered at the Imagine Film Festival. Since then the film has been screened in competition on over one hundred and thirty film festivals. Recently Victoria won £30.000 at the LGBT+ Iris Prize Film Festival, which can be used to shoot a new short (I am not a robot) in Wales. This year her tragicomic short Mustachio has been released in the Netherlands and is awaiting international distribution. At the moment she is developing the feature film A little long and sometimes happy together with screenwriter Randa Peters and producer Trent from OAK Motion Pictures. 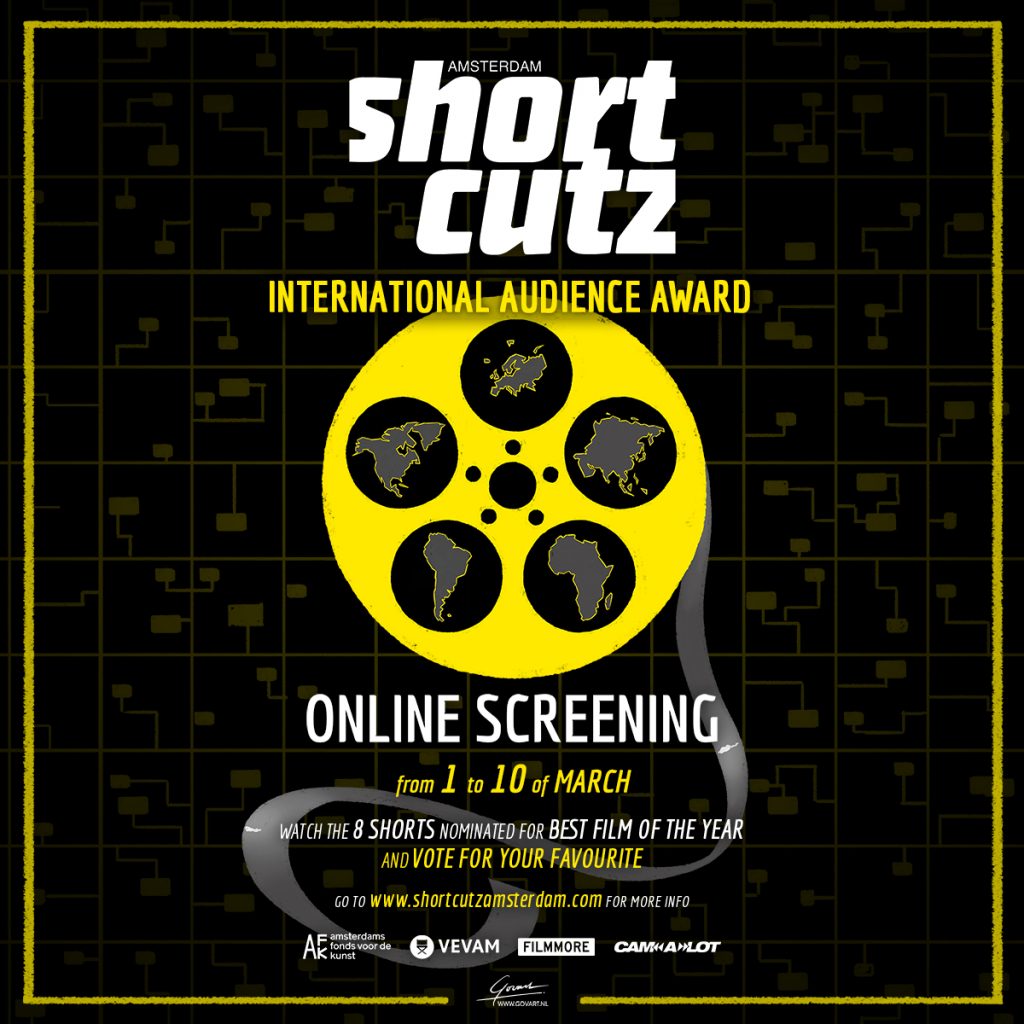